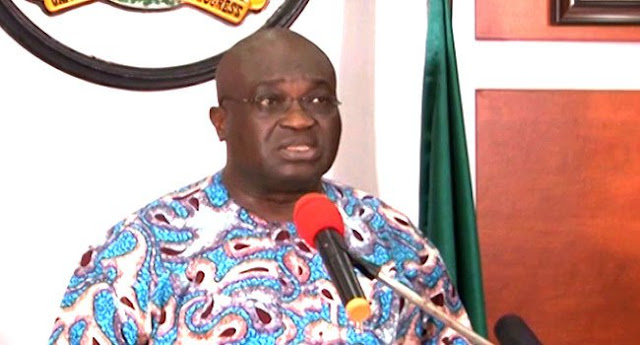 The Abia State Government has dismissed as fake news, reports that Governor Okezie Ikpeazu blamed the leader of the Indigenous Peoples of Biafra, Nnamdi Kanu, for the underdevelopment of the state.

The state Commissioner for Information, John Okiyi-Kalu, in a telephone conversation with our correspondent, said there was no element of truth in the report, dismissing the peddlers as cheap attention seekers.

According to the report, which is trending on the social media, Ikpeazu allegedly made the remarks during a Zoom media conference with some journalists on Saturday.

The governor was quoted as claiming that Kanu was the reason why he had not developed Abia and completed some of the projects he promised to do, because each time he approached the Federal Government to demand money, “they always tell me that my state is harbouring terrorists.”

The report also stated that the governor had threatened to appoint a replacement for Kanu’s late father should the IPOB leader, who is the prince of the Isiama Afaraukwu community, failed to return home to succeed the monarch, who was buried in February.

Ikpeazu was further quoted as saying, “I have decided to take the final decision as the executive Governor of Abia State.

“Nnamdi Kanu committed an offence and ran away before the unfortunate death of his father. Now, it’s time to make a decision.

“If after 21 days from now he fails to come back and be crowned the king of Ibeku, I will have no option but to appoint a king myself, and whoever I appoint must remain till I leave office.”

Kanu’s family described the remarks attributed to the governor as ridiculous.

Kanu’s younger brother, Emmanuel, who spoke on behalf of the family, accused security agencies of planting the said report in the media to distract the IPOB leader from his unwavering quest to actualise Biafra and to possibly pit the family against the state government.