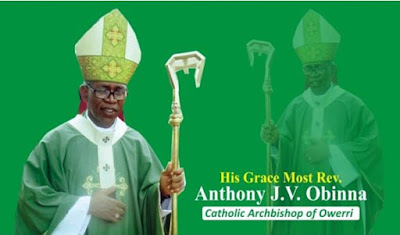 Archbishop Obinna calls on family members massacred in Obigbo to summit the names of dead, missing

Archbishop Anthony J. V. Obinna has asked the people whose relations were either killed or declared missing in the Obigbo massacre to forward their information to the Catholic Archdiocesan Secretariat, Owerri.

The Rivers state governor Nyesom Wike, had alleged that members of IPOB attacked police station during #EndSARS protest, which followed by the military clampdown that lead to loss of lives and properties in Obigbo.

However, many people have disagreed with the governor, saying there were attacks all over the country by hoodlums.

Although others accused the governor of playing politics with the lives of the Igbo for his selfish interest.

Meanwhile, Archbishop Obinna gave the advice when the issue was raised during the Archdiocesan Pastoral Council meeting, held at the Jubilee Hall, Maria Assumpta Cathedral, Owerri.

“The allegation, if found to be true, is a very serious development. Let us have the statistics of those killed and those believed to be missing in the incident.”

Archbishop Obinna in response sought to know if any pastoral councilor present at the meeting a relation had who was either killed or missing, during the alleged massacre and there was no response from anybody.

He also disclosed that the Catholic Bishops of Owerri and Onitsha Ecclesiastical Provinces will meet soon, and the issue of the alleged massacre was sure to make the agenda.

Continuing, “I must, again, reiterate the need for us to have credible information about the alleged Obigbo massacre.

“Catholic Bishops of Owerri and Onitsha Ecclesiastical Provinces will meet soon, and the issue is likely to be raised.

“Obigbo, though in Rivers State, is in Aba Catholic Diocese, Owerri Ecclesiastical Province. So, you can now understand that Obigbo is within our jurisdiction.”

Addressing the issue of police brutality in Imo State, the cleric advised victims to submit their petitions to the Judicial Commission of Inquiry, currently investigating the alleged brutality and extra-judicial killings by the police.

“Those who are unable to submit their petitions to the Commission, for one reason or the other, are advised to visit the Justice, Development, Peace Commission/Caritas, JDPC, Assumpta Secretariat, Owerri, for assistance,” Archbishop Obinna said.

Taiwan fears loss in US support as Trump booted from office

Top 3 Footballers Who Were Shot Dead In 2020

God have mercy: 3 footballers who were shot dead in 2020 (photos) Actually, we are living in a wicked world,

Top 5 Footballers Who Grew From Poverty To Wealth

We will be opening borders very soon says FG