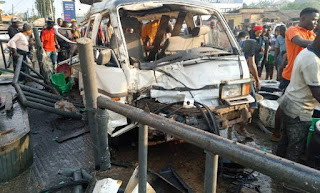 About seven persons were injured in two separate road crashes on Onitsha-Owerri expressway, Anambra Southeast Nigeria, the Federal Road Safety Commission (FRSC) has said. The crashes occurred at the Onitsha end of the expressway where a haulage truck marked EPE 587 XV ran against traffic and crashed into a  tricycle with full passengers and another, a lone vehicle crash took place at the Ihiala axis of the expressway.

Andrew Kumapayi, Sector Commander of the FRSC in Anambra said the victims were seriously injured and were rushed to a nearby hospital for treatment. He said a total of eight persons  were involved in the crashes. Kumapayi blamed the crash on overspeeding and recklessness while driving on the highway. 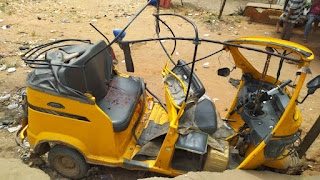 According to him,  two male adults were injured in a lone serious crash involving a Mazda bus with registration number  ABJ 641 XV that occurred near Frankguily Fuel Station along Ihiala – Owerri road. “In  another incident, a truck took one way  and hit a tricycle which eventually crashed. It involved a total of seven people but five male adults sustained varying degrees of injuries,” he said.

“They were rushed to hospital by  good Samaritans before the arrival of FRSC rescue team from Upper Iweka Outpost who are on ground to ensure free flow of traffic while obstruction is being cleared. “No life was lost,” Kumapayi added.

While wishing the injured a quick recovery, he warned motorists to desist from excessive speeding and abide by speed limits set by law to  prevent avoidable road traffic crashes in this Yuletide season. “Motorists especially truck drivers to desist from route violation as driving against traffic is suicidal,” he stated
SOURCE