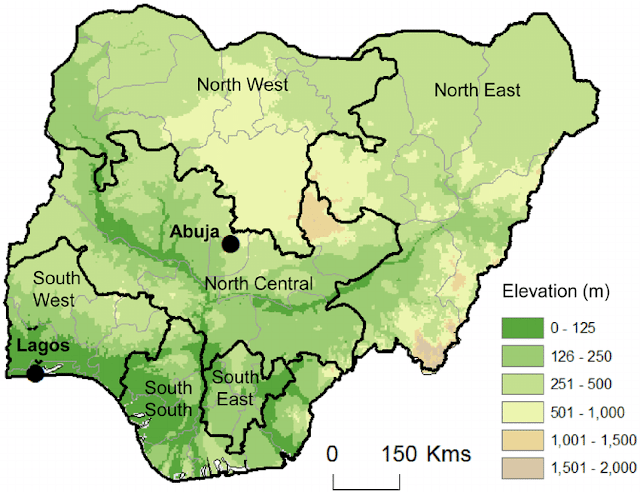 Disunited Nigeria in a free-fall into abyss, self-destruct

PRAYING for Nigeria’s redemption from its current woes is like asking God to prevent a building with defective foundation located in the Lekki area of Lagos from collapse. Even intercessions by best of prayer warriors cannot save such a building.

As long as Nigeria continues with its current inept political structure, its descent to self-destruct is definite. The ominous signs are there for any discerning mind to see except those with impaired vision and beneficiaries of the prejudicial system.

If indeed Nigeria is a product of amalgamation of two separate “countries”, comprising Northern and Southern protectorates up till 1914, it infers there should be a balance between the two regions in the distribution and management of the country’s resources.

This was the intention of the 1963 Constitution. The 1963 Constitution was painstakingly negotiated and tailored to address the country’s heterogeneous and multi-ethnic peculiarities for equity purposes, encouraging representatives of the regions to transfer part of their sovereignty to federal or centre at the time.

Abrogation and replacement of the 1963 Constitution with a unitary system (Decree No. 34 of 1966) was, therefore, a very costly political mistake made by General Johnson Aguiyi-Ironsi.

Rather than reverse this anomaly, the counter-coup by Northern elements in the army that brought General Yakubu Gowon to power sustained this same inappropriate structure that was partly responsible for their vengeance. This is the genesis of Nigeria’s unending woes and steady free-fall into abyss and self-destruct.

No matter the inherent flaws of the 1963 Constitution, the features of federalism in the constitution guaranteed equity and would have been left to evolve.

By now, Nigeria would have been a more stable country, offering leadership to the rest of Africa and enjoying global respect outside the continent. To have retained this unitary system till date through the current 1999 Constitution is dishonesty and unhelpful to the country’s unity.

This constitution which was indolently generated from the 1979 Constitution and foisted on Nigerians, was predetermined, draped in pseudo-federalism and inimical to a plural society like Nigeria.

Indeed, the 1999 Constitution is not a product of serious negotiation as it was deliberately framed to put the Northern region at advantage over the South. It gives the North more opportunities in federal bureaucracy than the South through the application of quota system or federal character principle, a policy meant to hold down the South for the North to catch up.

If this special waiver (quota system) deliberately imposed by this constitution was put in place to correct the educational and employment imbalance, among others, between the North and the South in public sector, for how long will this system be sustained? Is it in perpetuity? It has been in place even before 1960, and was given legal and official cover by the 1979 Constitution, and later the 1999 Constitution.

For equity purposes, why was the quota system not applied to the Igbo at the end of the civil war to facilitate their reintegration into society, under the 3Rs of Reconciliation, Reconstruction and Rehabilitation? The Igbo were left to fight their way into economic, social and political relevance to catch up with the rest of the country.

The North has obviously caught up with the South, and it is time the country got the federal character principle reviewed, discarded and done away with.

Besides the disparity in favour of the North, the 1999 Constitution is the root cause of corruption in the country. It concentrates power and resources in the hands of one man, promotes nepotism and encourages leaders to take total control of governmental instrument to pursue ethnic and sectional agenda.

This explains the attendant desperation by the various ethnic groups or regions to capture power at all cost at the centre, making it practically impossible, for example, to conduct accurate census and free and fair elections, as they are incidental to power and resources.

The unitary system is an aberration and provokes discontent within the polity resulting in national and diplomatic deficit. One of the consequences is Nigeria’s dwindling respect, influence and honour within and around the world.

The country has been on a descent from its hitherto enviable height, indicative of system anomaly, institutional mismatch and structural failure. Even African countries which used to be Nigeria’s sphere of influence in foreign policy matters, now see Nigeria as a weakling and underdog.

This was not the dream of Nigerians at independence when the structure and system of government-guaranteed national equity with each region having the autonomy to grow at its pace through unique local administration that was suitable to the needs and aspirations of the respective ethnic groups and regions.

It is the unitary nature of the 1999 Constitution that has given impetus for the entire organs of government, namely: the Executive, Legislature and the Judiciary to be headed by Northerners, besides service chiefs and heads of strategic ministries, departments and agencies of government that are also dominated by Northerners. Even for a blind man, this is obviously an unfair system that leaves the other partner, the South, disadvantaged.

Allowing the North to get away with this power-sharing disparity suggests the North is the superior partner, and the South, the inferior of the union. Implicitly, while political and economic opportunities are shrinking in the South, the North is experiencing increase. This is manifest in recruitment pattern in ministries, departments and agencies of the Federal Government, among others.

Thus, in response to dwindling prospects, Southerners now flee and migrate to other countries to take up demeaning jobs for survival, and sometimes, resort to all kinds of vices at home and abroad, including internet fraud and prostitution.

Southerners prefer to be strangers in foreign land with sense of liberty than remaining in a country where dreams cannot be fulfilled through decent and legitimate process of hard work and honesty. Identifying oneself as a Nigerian has become a burden because of the negative public perception, particularly in transnational circles.

Nigeria’s miseries are further compounded by prevailing political uncertainty and leadership vacuum fueled by the eccentric 1999 Constitution. Any country that is destined for greatness is known by the demeanour of those charged to manage its affairs.

How far such a country can go in meeting the aspirations of its citizenry is determined by the quality of leadership thought process. When those thoughts are driven by narrow and selfish motives other than national interest, what you get is futility.

Leadership from the bottom rung of the ladder to the top have veered the country from the course of greatness with no hope of attaining unity of aspiration.

Who will the youths look up to as reference group when all you hear, see, feel and experience from those at the helms of affairs is theft, nepotism, insincerity and lies as encapsulated in corruption?

READ ALSO: Herdsmen attack at Yenagoa will mark the end of jihadists in Biafra land – IPOB

Nigeria has become a metaphor for corruption and a country without direction. Citizens no longer believe in the country, as the texture of atmosphere in Nigeria reflects direct opposite of the country’s national motto of “Unity and Faith, Peace and Progress.”

Nigeria is currently disunited, faithless, tumultuous and regressive, and this also accounts for the unrestrained massive corruption going on in the country.

Obviously, the 1999 Constitution does not encourage Nigeria to fulfil purpose of a united country devoid of prejudice aimed at transforming its human and natural resources into advantage for the collective good of citizens.

Rather, opportunistic ideology holds sway. Get to power, screw policies in favour of your ethnic interest, particularly with projects and appointments, grab or steal as much wealth as you can, and get out. Leaders see Nigeria as a project with an expiry lifespan because of skepticism over its continuity as a country.

This is why distribution of resources are flagrantly allocated inequitably to serve primordial, narrow, sectional and selfish interest. Rather than strengthen institutions to fulfill national aspiration and purpose, institutions are deliberately weakened in preference for strong personalities and personalised leadership to enable them control and distribute the country’s resources at whims.

Today, insincerity has been elevated into a creed. There is no governmental agencies that functions transparently because of personal and sectional hidden agenda.

In fact, there is complete system failure in all aspects of the country’s life. This has also left in its trail bottled up anger and tension in the land that is gradually snowballing into a dangerous proportion capable of consuming the country.

There is no hope the country will ever recover or know true peace except the polity is rescued and restructured within the framework of the 1963 Constitution, otherwise, eventual disintegration is inevitable.

Owhoko, a journalist, publisher, and PR consultant, wrote from Lagos