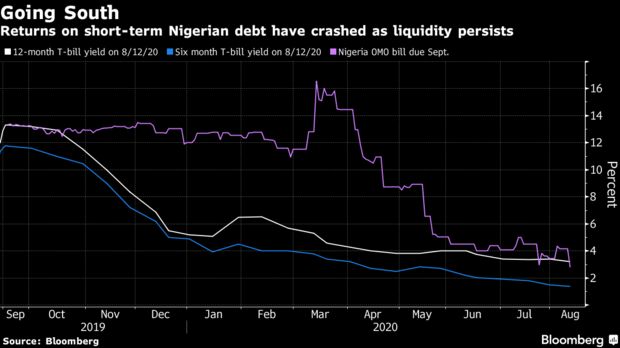 Nigeria bond assets rates drop to 10-year low as funds rush to short-term deb. The Nigeria central bank has halted dollar sales to foreigners since March. Foreign investors tempted into buying Nigerian debt paying interest of 13% a year ago are unable to move their cash out of the country. Worse still, the rate that investors now earn for lending money to the government by purchasing 12-month Treasury bills has dropped to a 10-year low of 3.2%. On top of that, the local currency has twice been devalued against the dollar this year, risking losses when the capital is repatriated.

With their cash stranded, funds have few choices but to park in short-term debt. They’re waiting for the central bank to resume foreign-exchange sales that were halted in mid-March after lower oil prices dried up dollar supplies. The economic fallout from the coronavirus pandemic only exacerbated the situation. “Some people are either stuck in the queue or they have now decided to reinvest some of the money,” said Ayodele Salami, chief investment officer at Duet Group, which has an Africa focused fund with investments in Nigeria. “There’s no level of returns that can compensate you for that risk — because the risk you are carrying is a 100% loss.”

Holders of Nigerian bonds and equities may have as much as $2.5 billion trapped in the country, Simon Kitchen, an analyst with EFG Hermes, said in a note to investors last week. Nigeria’s central bank is trying to hold the level of the naira stable without running down its foreign-exchange reserves, currently around $35.6 billion, to below $30 billion. A drop of about 16% in oil prices over the 12 months has cut the biggest source of Nigeria’s foreign-exchange earnings.

The regulator introduced capital controls and restrictions on imports in 2015, when it pegged the naira at between 197-199 per dollar. The official exchange rate was lowered to 379 last week from 360 in March and 307 in 2019. “We’ve been investing across African markets for about 15 years,” Salami of Duet Group said. “And in 15 years, Nigeria is the only place where twice in less than five years you have a lockdown or a complete freeze of the foreign-exchange market.”

Average yields on Treasury bills that are sold at regular auctions have declined to 1.9%, near the lowest on record, while rates on central bank paper, otherwise known as OMOs, have declined to about 4% across the curve. OMOs used to trade in the high double digits. The yield on Nigeria’s government bond due 2026 fell to 6.7% Thursday, compared with more than 14% a year ago. A spokesman for Nigeria’s central bank didn’t answer two calls to his mobile phone.

“There’s no need for anybody to worry as long as you allow us to deal with this issue in an orderly fashion,” central bank Governor Godwin Emefiele said on June 24. “It’s a guarantee, you will get paid, but be patient.” The lower returns are not only hitting foreigners. Local pension funds that have more than 70% of their portfolios in government bonds are losing money when adjusted for inflation, which has averaged 11.8% in the past year. “The value of pension assets will depreciate in real terms,” said Wale Olusi, head of research at United Capital Plc in Lagos. “This is very depressing for an economy with huge potential for investment in a wide range of sectors.”

Biafra: Yoruba Back IPOB For Total Separation On October 1st