A global human rights organisation, Amnesty International, has said that over 10,000 people arrested in the context of the Boko Haram crisis have died in military custody since 2011, many of them in Giwa Barracks, Borno State. The AI lamented that up to 25 per cent of the casualties are older men and women who are most affected and vulnerable during Boko Haram and military raids on villages and communities. 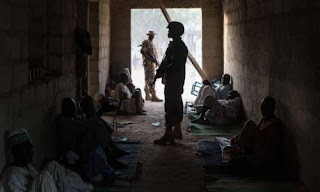 Amnesty disclosed these in its latest report on Tuesday – a 67-page report, titled, “My heart is in pain”: Older people’s experience of conflict, displacement, and detention in North-East Nigeria. The new report revealed that the Nigerian military had committed atrocities against older women and men, with nobody held to account. The report also focuses on how displaced older people are consistently overlooked by the humanitarian response and their current pathetic condition in the insurgency.

The report partly reads, “Nigeria’s military, in turn, has repeatedly shot older people to death in their own homes during raids on villages in Boko Haram-controlled areas. Thousands of older people have been denied dignity in hellish conditions in military detention, with many hundreds of them dying in squalor. These, too, amount to war crimes and potentially crimes against humanity.” The Director of Crisis Response at Amnesty International, Joanne Mariner, said, “When Boko Haram has invaded towns and villages, older men and women have often been among the last to flee, leaving them particularly exposed to the armed group’s brutality and repression – amounting to war crimes and likely crimes against humanity. This has included torture, being forced to witness killings and abductions of their children, as well as looting resulting in extreme food insecurity,”

“Many villages in areas under Boko Haram control are disproportionately populated by older people who are unable to flee or who choose to stay and continue working their land. In these villages, older people face threats from all sides. Boko Haram loots their property and often restricts older women’s movement, making it harder for families to earn money and feed themselves. “Boko Haram also abducts or kills their children and grandchildren. Some of them said instead of killing me; they’d put me in permanent pain. They brought out their knife and stabbed me in my foot, leaving a big gash,” said an 80-year-old woman from a village in Michika local government area, Adamawa State, in the report.

The AI report added, “On 28 November 2020, Boko Haram killed at least 43 farmworkers near Koshebe village, in Borno State, mostly with machetes or knives; dozens more civilians from the area remain missing. “Amnesty International interviewed a 65-year-old man who was among those captured; he was on a one-week contract for farm labour, as he said the food assistance his family receives in displacement is irregular and insufficient to feed them. Boko Haram spared and released the man, but murdered two of his sons.

“Those boys, they’re the ones who help me stay alive,” the man said. Boko Haram had murdered another of his sons five years earlier, during an attack that forced his family to flee their village in Mafa LGA. “Boko Haram’s looting of harvests and livestock, combined with the military’s severe restrictions on aid access, has resulted in extreme food insecurity for older people, with Amnesty International receiving reports of many dying of starvation. In September 2020, the UN Secretary-General indicated that Northeast Nigeria was at risk of famine, with alarming levels of food insecurity and hunger.

“Amnesty International estimates that, in the context of the Boko Haram crisis, at least 10,000 people have died in custody since 2011, many of them in Giwa Barracks. The organisation reviewed more than 120 images of corpses brought from the barracks to a local mortuary and spoke to individuals with insider knowledge who estimated that 15-25% of those who have perished are older men. This is disproportionately high, as older men appear to account for no more than 4% of the population in Northeast Nigeria. In April 2017 alone,” the report added.

7 Churches In The World That Allow Gay Marriage