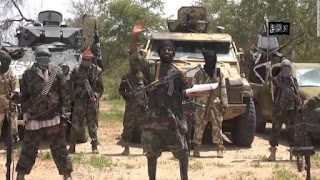 MAIDUGURI, Nigeria—Traveling by road into Maiduguri, the capital of Nigeria’s northeast, has become one of the most dangerous journeys on earth. Vehicles entering the sprawling, sun-baked city pass under banners that welcome visitors to the “Home of Peace,” a nickname coined in happier times.  But in the past six months alone, more than 200 people have been murdered or kidnapped on the four main highways that head into a town now more famous as the birthplace of the Boko Haram insurgency, according to analysis from the Armed Conflict Location and Event Data Project, interviews with soldiers and state officials. The attacks are conducted by militants fighting for Boko Haram and a splinter group loyal to Islamic State. With each passing month they become more brazen, targeting civilians, aid workers, soldiers and even the state’s most powerful politicians.

In September, jihadists attacked the heavily armed convoy of the governor of Borno state, Babagana Zulum, on the road from his Maiduguri office to Baga, near the border with Chad, leaving 20 people dead and forcing one of Nigeria’s most powerful men to be rushed into an armored vehicle amid a hail of bullets. In July, 37 Nigerian special-forces soldiers were killed in a militant ambush on the Damboa road, which leads south out of the city. Two weeks later, the extremists released a video showing the execution of five aid workers they had abducted on the Monguno road, which heads north toward Lake Chad.

In recent weeks, the jihadists have abducted dozens more people, including government officials from the Ministry of Reconstruction, Rehabilitation and Resettlement, and on Tuesday, seven guests from a wedding party including the bride. “Whenever we leave the road from Maiduguri, we just say our final goodbyes to our family in case we don’t return,” said Ahmed Shehu, chairman of Borno’s Civil Society Forum, who lost a friend in a militant attack this summer. “The terrorists rule the road.” A victim of an attack on the convoy of Borno state’s governor was buried in Maiduguri on Sept. 26. The highway attacks have become so frequent in recent months that some are no longer even reported.

Soldiers and Maiduguri residents who travel the roads say the extremists regularly erect mobile checkpoints, searching for Christians and government employees to kidnap for ransom or execute on the roadside. International aid agencies, including the Red Cross and the International Rescue Committee, have stopped leaving Maiduguri by road after their employees were killed, forcing aid workers to travel to refugee camps by helicopter and light aircraft. Even aid-agency aircraft were briefly grounded in July after a militant attack on a United Nations helicopter, but have since resumed flights.

Truck and taxi drivers with no option but to ply the road can only travel on most major routes with a military escort, yet some complain that makes them even more of a target. The swelling tide of lawlessness on the highways connecting Nigeria’s largest northeastern towns comes amid the government’s faltering strategy to combat a decadelong insurgency that has metastasized into one of the world’s deadliest jihadist campaigns.

President Muhammadu Buhari has repeatedly claimed that Boko Haram and its affiliates have been technically defeated. But since last year, the militants have been advancing, overrunning dozens of smaller military bases and looting the weapons inside. According to the U.S. Council on Foreign Relations, the period since July 2018 has been deadlier for Nigeria’s security-service personnel than any other time in the decadelong conflict. Maiduguri has seen its population swell in recent years as refugees fled the violent insurgency of Boko Haram.

Stung by repeated defeats, Nigeria’s military overhauled its strategy, consolidating forces in cities in so-called super camps designed to be too large for the insurgents to overwhelm. But the move has created a paradox: Garrisoned cities like Maiduguri feel more secure but the surrounding roads and countryside have become a kind of no man’s land, plagued by even deeper levels of insecurity. Farmers tending to crops beyond the city limits are protected by a new vigilante force called the Agro Rangers. A growing number of villages are under the extremists’ control, with militants taxing and policing the local population and instituting their own brand of Sharia justice. The highways are where these two systems meet.

“Maiduguri has become a green zone, but step outside the city and you immediately see the reality,” said Bulama Bukarti, an associate with the Center for Strategic and International Studies, a Washington-based think tank. “The attacks on these roads are continuous and the militants can pick off whatever targets they choose.”  The epidemic of roadside violence is spreading across Nigeria’s northern states, with dozens of attacks on the roads between the cities of Kaduna, Kano and Abuja. On Tuesday, 12 police officers were kidnapped between the cities of Zamfara and Katsina, the president’s hometown.

Nigeria’s government and military says the super-camp policy is a success. But senior defense officials admit privately it is unpopular inside the military. One official said it created a “deliberate stalemate” allowing beleaguered generals to claim victory as their bases are no longer being overrun. “Outside Maiduguri, it’s chaos,” the official said. The city of Maiduguri is no stranger to insecurity. The capital of Borno state that was once a British colonial outpost is a sweltering jumble of low-slung buildings, home to some two million people on the southern edge of the Sahel, the arid band of territory that borders the Sahara.

More than a sixth of that population arrived as refugees since the summer of 2009, when the founder of Boko Haram, a charismatic cleric named Mohammed Yusuf, was captured and then executed in the city’s central police station. Families displaced from across Nigeria’s northeast live crammed into Maiduguri’s abandoned apartment buildings and cement factories, and in 14 overflowing refugee camps where they sleep in tarpaulin tents and grass huts.

Civilians have fled from the villages to the cities as Nigeria’s army dramatically expanded its presence there. In Maiduguri, the Maimalari barracks on the city’s northern edge is the headquarters of the war against Boko Haram and home to more than 1,000 soldiers. Taxi driver Sani Adamu is one of many motorists who have been attacked by Boko Haram along the Maiduguri-Damaturu road. But in recent months, the roads have become increasingly deadly.

Mr. Zulum, the Borno state governor, drove a taxi to pay his way through college and has witnessed how safety on the region’s roads has deteriorated. His convoy has been attacked twice in recent months. He told President Buhari in August that the super-camp strategy was “unwise and not working.” “The governor wants new thinking to stop these endless killings,” said Isa Gusau, Mr. Zulum’s media adviser. “We cannot continue to do the same thing over and over and expect a different result.”

Many of the drivers and their passengers are losing their lives.

Ahmadu Kachalla, a 30-year-old bus driver, said that on three occasions he has had to make an emergency U-turn and speed away after realizing the checkpoint ahead was manned not by the Nigerian army, but by jihadist fighters. “The attacks are now so common, they have become almost normal,” he said, describing a recent incident where he was stopped by soldiers at a military checkpoint who informed him Boko Haram had begun an attack further ahead.

His colleague Sani Adamu still has a bullet in his back after being shot by Boko Haram while driving along the Damaturu road. Mr. Adamu said the fighters emerged on the roadside and began spraying the traffic with automatic gunfire. One of his passengers was killed. Another lost both his eyes.  Passengers at Kasuwar Shanu motor park in Maiduguri awaited the start of their journey on Oct. 22 at 3 p.m., the allocated time for travel ordered by Nigerian forces seeking to rid the roads of jihadists. “We need help from the government,” said Mr. Adamu, showing an X-ray of the bullet trapped near his spine. “We have no other occupation to cater for our families other than driving on these dangerous roads.”

Other drivers say the only way to survive is to pay protection money to Boko Haram. Some drivers say that even if they avoid the militants’ mobile checkpoints, members of security services will force them to pay a bribe, usually referred to as “water money.” The roads have become perilous even for Nigeria’s most elite fighting force. Two soldiers from Maimalari base said on condition of anonymity that they saw dozens of bodies brought back to the base after an ambush killed at least 38 special-forces soldiers on the Damboa road several months ago. “The bodies were recovered and transported to Maiduguri for burial,” he said.

The Shehu of Borno, the highest-ranking Islamic traditional ruler in the region—himself a survivor of a Boko Haram attack on the road in front of his Maiduguri palace—issued a short but chilling statement demanding government action. “No one is safe,” he said.

Biafra: What Really Cause Fight Between Me And Nnamdi kanu – Uche Mefor Opens Up

Explosion has rocked a church belonging to father of Rivers Governor, Nyesom Wike, in Port Harcourt, the state capital. It

Umahi: Arrest me with proof of instigating violence in Ebonyi — Sen. Egwu