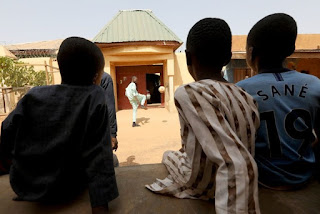 Abductions of hundreds of students in northwestern Nigeria are the latest examples of a common tactic among criminal and jihadi groups, underscoring that Boko Haram is far from the government’s only problem in the north.

What is behind the latest upsurge in student abductions?

The student abductions in northwestern Nigeria reflect the growing strength of criminal gangs and the weakness of the federal government and its security services. Kidnapping is prevalent nationwide, often perpetrated by small, ad hoc groups. The northwest is receiving attention now because, unlike elsewhere, the perpetrators are well-organized criminal gangs and the number of victims has been dramatically large. In the town of Kankara, around three hundred boys were abducted in December. Just days later, more than eighty students in Dandume were targeted in a failed kidnapping. Both episodes were reminiscent of the 2014 kidnapping of close to three hundred schoolgirls in the northeastern town of Chibok. (More than one hundred Chibo girls are still missing.)

Kidnapping, which is highly profitable for criminal and jihadi groups, is especially attractive now in the face of a nationwide economic slowdown brought on by a decline in international oil prices and disruptions from the COVID-19 pandemic. Explosive population growth has pushed up the prices of food, especially beef. Criminal gangs often rustle cattle as well as kidnap, as was the case at both Kankara and Dandume.

Are there links between Boko Haram and these criminal gangs?

Ties appear to be transactional and opportunistic. Bandit networks are involved in illegal weapons trafficking and on occasion supply Boko Haram. They sometimes sell those they kidnap to Boko Haram or carry out criminal operations at the group’s request. It’s possible that their foot soldiers overlap. But such groups are, in essence, criminal, while Boko Haram’s motives are ideological, religious, and political in nature (though the militant group readily resorts to criminal methods).

Do these kidnappings signal an expansion of Boko Haram into the northwest?

Boko Haram has become a catchall label for a kaleidoscope of factions; the one led by Abubakar Shekau is the best known, but it is only one of several. If Shekau was involved in the Kankara kidnapping, as he claims, then his faction is indeed newly active in the northwest, far from the Lake Chad Basin where it usually operates. But it remains too early to tell whether the abduction is a genuine reflection of a Boko Haram expansion into the area or if the jihadi group made an opportunistic claim for publicity. Aside from Boko Haram, other jihadi groups are already active in the northwest, sometimes in conjunction with bandit groups or on behalf of herders quarreling with farmers over land and water use.

How is the Nigerian government responding?

At Dandume, Nigerian security services responded quickly. The federal government is taking credit for foiling the abduction, though it was helped by a local militia. In the case of Kankara, the state (not federal) government secured the release of the victims, likely by paying ransom. Nationwide, President Muhammadu Buhari’s government is being criticized for its failure to provide security to Nigerians—from Boko Haram and other jihadis in the north, from conflicts over land and water use in the Middle Belt, and from a low-level insurgency in the oil patch in the south. The nationwide crime wave, particularly abductions such as those in Kankara, saps public confidence in all levels of government.

Like its predecessors, the Buhari government has responded to these security challenges by resorting to force. The administration has advanced no political initiative to address their social and economic drivers. The Nigerian army’s strategy of fortifying bases has ceded control of the countryside to jihadis, bandits, and others. Though paying ransom is illegal in Nigeria, the federal government is too weak to enforce the law, and the practice is ubiquitous. The national police and the army (which is almost always used to maintain internal order rather than respond to external threats) are understaffed and poorly trained, with their low pay often in arrears. Moreover, Nigerians distrust the security services, long associated with abuses against the civilian population. Where kidnappers have been thwarted, as at Dandume, local militias appear to have been involved.

What does this trend bode for national and regional security?

The kidnapping at Kankara and the failed abduction at Dandume underscore the country’s ballooning security challenges. Although the schoolchildren were rescued in these particular episodes, criminal and jihadi groups appear to move freely through northern Nigeria, a region with a population of roughly one hundred million. Once the political and security hegemon [PDF] of West Africa (if only briefly), Nigeria has failed to respond successfully to its vast security challenges, and its capacity for regional leadership has consequently declined. This, in turn, exacerbates instability across the wider region in the face of a criminal and jihadi onslaught.

Southern Kaduna demands creation of state as solution to crisis

Nnamdi Kanu Is Just A Freedom Fighter Not A Criminal, He Should Be allowed To Burial His Parents – British Government