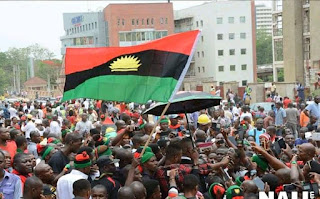 The attention of the Indigenous People of Biafra (IPOB), has been drawn to the deceptive statement credited to the frontline Fulani murderous group called Miyetti Allah Cattle Breeders Association of Nigeria (MACBAN), that they are solely concerned about their business interests in the East and not motivated by their age-long territorial expansionism. We find it amusing that a known terror sponsor with a known history of ethnic cleansing in the Middle Belt will claim to have purely business interest in Biafra land.

We, therefore, warn Miyetti Allah, who by their own admission is the lead coordinating group of all terrorist groups in Nigeria, to stay away from Biafraland. We don’t need them and their investment including their footsoldiers – Fulani herdsmen, Bandits, Ansaru Terrorists, ISWAP, and others. They should all steer clear of Biafraland before it’s too late.

Biafraland cannot harbour bloodsuckers masquerading as herders. We can no longer sit idly by and watch them spill innocent blood under whatever guise, or raid communities without provocation, or maim and rape our mothers and daughters, or destroy our crops and farmlands.  IPOB family worldwide has vowed never to allow Miyetti Allah to continue with their criminal activities in Biafraland and that is how it shall be. You may have a few cowardly eastern governors in your pocket but be minded that such nonsense does not extend to IPOB.

Miyetti Allah can only deceive their fellow Nigerians with their gimmicks and antics, we IPOB is smarter than them any time any day. We are working tirelessly night and day to protect our people regardless of human and material cost. The Nigerian government, security agencies, and Miyetti Allah are all working together to soften the ground for Fulani terrorist take over of homelands of indigenous people the British experimentally lumped together into the largest human Zoo in the world. Miyetti Allah are free to torment and operate in every part of Nigeria because no one is in any doubt that Britain bequeathed Nigeria to them upon independence in 1960 but Biafraland is out of bounds.

It is on record that Miyetti Allah has committed lots of atrocities and massacred innocent citizens in Nigeria particularly in Southern Kaduna and Middle Belt and parts of Biafraland that is why we cannot continue to allow them to carry on with their evil mission in the territory of Biafra. Despite the immense support these cattle-herding terrorists enjoy from the Fulani government in Aso Rock and Nigeria’s security operatives in army and police, we shall continue to defend our land.

Miyetti Allah will meet their end if they don’t stay away from our territory.

Biafra: APC will not hand over to you find alternative, Obasanjo tells Igbo leaders