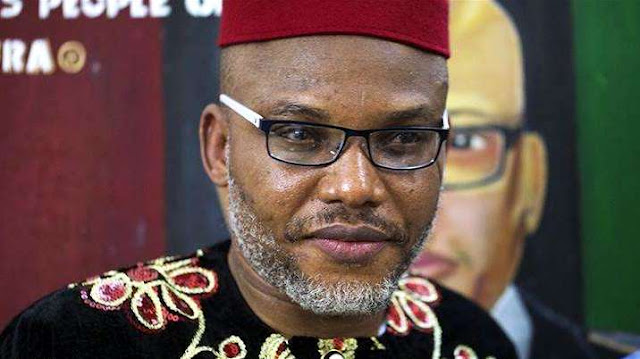 Kanu petitions US, UK over arrest of 70 Biafrans

The Indigenous People of Biafra (IPOB) leader, Nnamdi Kanu said he had petitioned the United Kingdom (UK) and the United States (US) over the arrest of 70 pro-Biafrans by police in Imo State.

Kanu disclosed this in a statement he signed but released through IPOB spokesman, Emma Powerful on Friday.

In the letter, Kanu warned that a peaceful agitation should not be construed as weakness.

“We wish to draw the attention of the creator of Nigeria, the Almighty Great Britain through the British High Commissioner to Nigeria, UK in Nigeria, the US State Department through US Mission Nigeria, to the deliberate and orchestrated provocations/actions of the government against peaceful Biafrans.

“Without provocation and having not committed any crime known to law, a group of Biafrans numbering over 70 were arrested, humiliated and detained by Isaac Olutayo Akinmoyede, Police Commissioner in Imo State.

“Despite the daily carnage and mayhem in Imo State by herdsmen, no one has been arrested and detained in the police custody.

“Police are yet to arrest or parade suspects involved in the killings and destruction of farmlands in the State.

“This same police had the temerity to detain innocent people going about their business because they are Biafrans.

“Is the state governor and commissioner for police saying that Biafrans can be arrested at will even when no crime has been committed but herdsmen are free to roam and kill at will.

“This level of provocation is unacceptable. If and when Biafran people decide to take matters into their own hands, let it be on record that the duo caused it. Peaceful agitation should not be construed as weakness,” he said.

Buhari’s silence on Lekki shootings, evidence that attacks were aimed at bringing down Yorubaland – Akintoye