December 6 , 2020 | EASTERN PILOT Report By : Kunle Adebajo Victims of military brutality at the Lekki Tollgate Area during a peaceful dem… 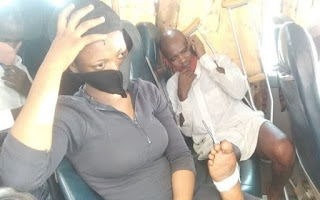 Victims of military brutality at the Lekki Tollgate Area during a peaceful demonstration by youths in October are being offered bribes and threatened to keep quiet, says Dabiraoluwa Adeyinka, one of the protesters with petitions before the Lagos State Judicial Panel of Enquiry on police brutality. Speaking to The Nation on Friday, Adeyinka said the reason some victims’ families had not spoken out was “because they are under threats.”

“We know many people they have threatened, we know many people they have tried to bribe with N200,000, N500,000,” she said. “Can this heal their wounds? Can it replace their amputated legs? Can it bring back the dead? We just want justice. People were shot at. I saw it. They tried shooting at me. Someone else took my bullet.” Adeyinka said she came to the panel of enquiry alongside 14 other protesters with gunshot wounds from the fire opened on them by personnel of the Nigerian Army at the Lekki Toll Plaza on the night of Tuesday,  October 20, and then a 15th victim shot at in Ojodu Berger, Lagos.

“We don’t want to be marginalised in our own country,  that is why we have come here today to show victims,” she said. “They said nobody was shot at, they said nobody died. We have accounts of people that died. I was there on that stage. I was the one telling people, ‘Sit down! Don’t run!’ People died. People are still at the emergency ward as I speak to you now.” Adeyinka also listed hospitals where the survivors and victims of shooting were taken on the night which she added might have also been intimidated to keep quiet.

According to her, the hospitals include the National Orthopaedic Hospital, Igbobi; Lagos University Teaching Hospital; Lagos State University Teaching Hospital; Ikeja General Hospital and Reddington Hospital, Lekki. “We took dead bodies to Reddington… All of them told us that they cannot give us the data. I went personally to see their doctor. I met the HR and he told me to give him 24 hours to provide the database of all these people. Till date, he has not gotten back to us,” she explained. Adesina Ogunlana, a human rights lawyer representing some of the injured EndSARS protesters, corroborated Adeyinka’s claims.

Some of the #ENDSARS protesters who sustained gunshot wounds from the protest on October 20 were at the Lagos Court of Arbitration on Friday, accompanied by their lawyer,  Ogunlana. Some had bandages and Plaster of Paris on various parts of their bodies and others had their limbs amputated. Edwin Augustine, who said he still had a bullet lodged in his thigh, explained that he had just left a snooker game to check his phone, where he was charging it when the lights suddenly went off and the soldiers started firing. The person manning the phone-charging spot was shot at his side, Augustine said, adding that he turned to see if the young man was okay when he got shot too on the thigh.

“Even right now, the bullet is still inside me,” he said as he slightly lifted his pair of shorts to reveal a bandage on his leg that was supported with a metal frame. “I don’t actually know what happened. The next day, I just woke up and saw myself at Ikeja General Hospital.” He said he borrowed someone’s phone, logged into his Gmail account to get his girlfriend’s and brother’s contacts, and then called to inform them of his predicament. Augustine said the bullet made his leg swollen and was giving him discomfort. “Sometimes, my leg got stiff. So, I wonder why the government is saying they did not shoot at us while I still have the bullet in my body right now at this date and time.”

Nathaniel Solomon, who also showed up at the venue of the panel, came with the picture of a young man shot dead and lying on the floor. That was his brother, Abouta Solomon, who was killed at the protest ground in Lekki, he said. “We are from Mubi North Local Government Area of Adamawa State. My brother was shot at the Lekki tollgate on October 20. It was the army that shot him,” he continued. He said he was called by other protesters who were with Abouta and so he rushed to the venue where he found his brother’s corpse. “I didn’t know when my brother left home for the tollgate. He never told me he was going there. He was living with me here in Lekki, at Marwa,” he said.

“Some boys called me. By then, my phone battery was flat, the phone had gone off. They called one of our brothers and told him that Abouta had been killed. So, we went there, found him on the grass, picked up his corpse and we went to St Paul’s Mortuary at Oyingbo. “His corpse was at the Lekki tollgate. There were protesters around at the time. He was laid on the grass that was growing on the road divider in the middle of the road.” He added that he saw about four other people who had been shot dead just like his brother.

‘We Are In This For Our Children’

Ogunlana said during the demonstration in front of the courthouse on Friday that their struggle was not only for those killed by state operatives and others still suffering from various levels of injuries but “for the future of our children”. “The government must not continue with the character of reckless impunity. These people are here, a lot of iron in their bodies. Their parents are here; they said their parents are not coming. We know what it took us to even encourage these ones to come,” he said. Adeyinka also said among the victims were people with amputated legs and some who had undergone brain and other surgeries. Dozens others had yet to be discharged, she added.

“People are still in the hospital, people are still in the emergency ward, as I speak to you right now. And people are not even treated properly in those hospitals they took them to. They treated them halfway and sent them out of the hospital. We had to take responsibility,” she asserted. “From that day till now, I have been combing hospitals; we’ve been seeing to their welfare and medical bills, from that day till now and we are still doing.” “This morning, we had to rush one to the hospital because he is not fine yet. We want justice for these people.”

The Nigerian Army had first denied that it was involved in the shooting incident in Lekki. Then, it admitted its troops were deployed but said they did not open fire on the protesters. In November, its representative at the Lagos panel conceded shots were fired but said they were blank bullets not capable of inflicting serious injury. In an investigative report published on November 19, CNN established that some of the bullets fired at the tollgate were live ammunition bought from Serbia between 2005 and 2016.  “Evidence of bullet casings from the scene match those used by the Nigerian Army when shooting live rounds, according to current and former Nigerian military officials,” the news outlet said.