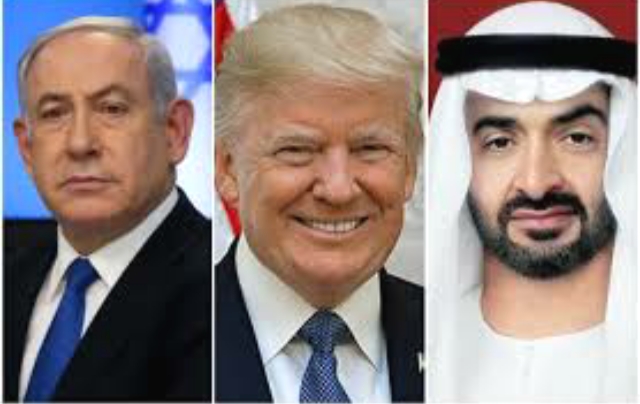 Israel and the United Arab Emirates have reached an agreement to normalize relations between the two countries for the first time since the establishment of the Jewish state in 1948, according to a report by Reuters Thursday afternoon.

Prime Minister Binyamin Netanyahu is expected to make a formal statement on the development at 7:00 p.m. Jerusalem time.

As part of the deal, Israel has agreed to suspend its plan to apply sovereignty over parts of Judea and Samaria.

“Israel will suspend declaring sovereignty over areas outlined in the President’s Vision for Peace and focus its efforts now on expanding ties with other countries in the Arab and Muslim world,” reads a joint statement to be issued by the US, Israel, and the UAE which President Trump tweeted out.

“Everybody said this would be impossible,” Trump said Thursday. “After 49 years, Israel and the United Arab Emirates will fully normalize their diplomatic relations. They exchange embassies and ambassadors and begin cooperation across the border.”

The president later hinted that more diplomatic breakthroughs between Israel and Arab states are likely to be announced.

“Things are happening that I can’t talk about.”

“This historic diplomatic breakthrough will advance peace in the Middle East region and is a testament to the bold diplomacy and vision of the three leaders and the courage of the United Arab Emirates and Israel to chart a new path that will unlock the great potential in the region,” the joint statement says in part.

The White House officials who spoke with Reuters said that agreement was the result of lengthy discussions between Israel and the United Arab Emirates, adding that the talks had been accelerated recently.

But the deal, which will be dubbed the “Abraham Accords”, was only finally sealed on Thursday, in a phone call between President Trump, Prime Minister Netanyahu, and Sheikh Mohammed Bin Zayed, crown prince of Abu Dhabi and President of the UAE.

The Abraham Accords, Israel’s first peace deal with an Arab state since the treaty with the Hashemite Kingdom of Jordan in 1994, was negotiated in large part by President Trump’s son-in-law and senior adviser Jared Kushner, along with Middle East envoy Avi Berkowitz, Secretary of State Mike Pompeo, and National Security Advisor Robert O’Brein.

Prior to Thursday, Egypt and Jordan were the only Arab countries to recognize the Jewish state.

The new agreement will include the establishment of embassies or other formal diplomatic offices in the respective countries.

In addition, a direct flight line will be opened between Israel’s Ben Gurion International Airport and Abu Dhabi.

Israeli and UAE delegations are expected to meet in the coming weeks to sign bilateral agreements on investment, tourism, direct flights, security, and telecommunications.

Earlier on Thursday, Prime Minister Netanyahu abruptly left a meeting of the Coronavirus Cabinet, telling ministers he was needed for a matter “of national importance”.

Netanyahu added that they would “find out later why I left.”