The leader of the Indigenous People of Biafra (IPOB), Nnamdi Kanu, who is championing the agitation for the Republic of Biafra, has once again berated the British government.

The IPOB leader who doubles as the director of Radio Biafra lampooned the British government in the latest rant on the micro-blogging site, Twitter on Monday night, January 13.

This online news platform understands that the IPOB leader accused the British government of masterminding the killing and starvation of millions of Biafrans to death during the Biafran war.

The Biafran war otherwise known as the Nigerian civil war was a civil war in Nigeria fought between the government of Nigeria and the secessionist state of Biafra from 6 July 1967 to 15 January 1970.

In a bid to mark “Biafra War 50th Anniversary,” Kanu took to tweet to accused the British government of masterminding the war 50 years ago.

Kanu also revealed in his tweet that he would be holding a live broadcast on Wednesday, January 15 in order to mark the “Biafra War 50th Anniversary.”

Kanu tweeted: “50 years ago Britain masterminded the killing & starvation of millions of Biafrans to death; we were forced to abandon the war. But did the war end?

50 years ago Britain masterminded the killing & starvation of millions of Biafrans to death; we were forced to abandon the war.

But did the war end?

Join us as we mark the Biafra War 50th Anniversary. 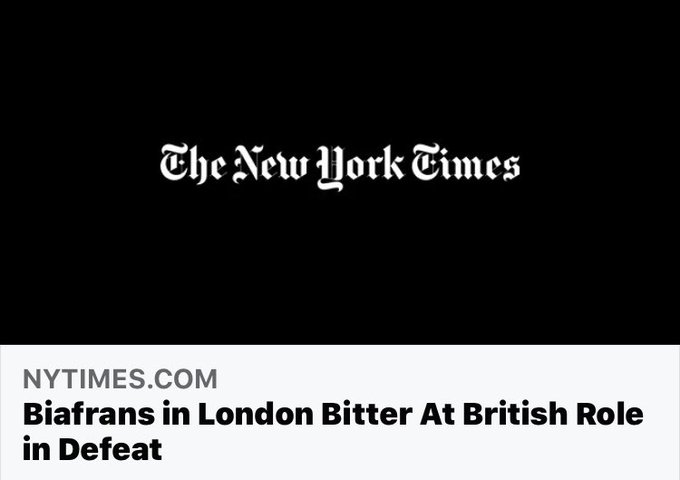 1,022 people are talking about this

Meanwhile, Kanu’s accusation is coming at the time Prophet Joshua Iginla, the General Overseer of Champions Royal Assembly, an interdenominational church in Abuja, Nigeria’s capital, released 2020 prophecies, stating that the agitation for the Republic of Biafra, will gain international recognition this year.

“I’m not a prophet of doom but I must tell you the truth we have not seen the end of the Biafra agitation. This year it will take another turn and continue to grow like that,” he predicted.

Nnamdi Kanu is leading a group (IPOB) seeking secession from Nigeria. The group has since been proscribed by the Federal Government of Nigeria led by President Muhammadu Buhari.

Bill Gates To Release $2.1 Billions For Biafra Development When Achieved

The founder of Microsoft, king of software and world richest man, the great Bill Gates, has pledged the donation of

I Am Giving Nnamdi Kanu 21 Days To Come Back And Be Crown The King Of Ibeku Or… – Governor, Okezie Ikpeazu

September 17 Is a Day You Must Not Forget, Rev Mbaka Tells Biafra People

Biafra: Igbos will cease to be part of one Nigeria if denied 2023 Presidency – Dr Chukwuemeka Ezeife