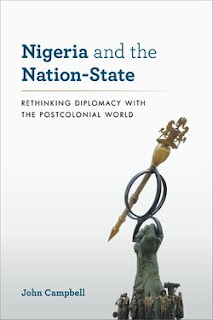 A Book By: John Campbell

Rethinking Diplomacy with the Postcolonial World. Former Ambassador John Campbell illustrates the history and importance of Nigeria, a country too often overlooked by the West. Nigeria matters. It is Africa’s largest economy, and it is projected to become the third most populous country in the world by 2050, but its democratic aspirations are challenged by rising insecurity. John Campbell traces the fractured colonial history and contemporary ethnic conflicts and political corruption that define Nigeria today. It was not—and never had been—a conventional nation-state. It is still not quite a nation because Nigerians are not yet united by language, religion, culture, or a common national story. It is not quite a state because the government is weak and getting weaker, beset by Islamist terrorism, insurrection, intercommunal violence, and a countrywide crime wave.

This deeply knowledgeable book is an antidote to those who would make the mistakes of Vietnam, Afghanistan, and Iraq—mistakes based on misunderstanding—in Nigeria. Up to now, such mistakes have largely been avoided, but Nigeria will soon—and Campbell argues already does—require much greater attention by the West.

”Campbell . . . documents the prospects and pitfalls facing Africa’s most populous country in this well-informed and highly specialized account. Chronicling the precolonial, colonial, and postindependence periods, Campbell cogently argues that Nigeria, divided by multiple languages, ethnicities, and religions, lacks a strong national identity. . . . Packed with insider details of foreign policy–making and deep dives into Nigeria’s demographics and political history, this expert treatise will resonate with readers well versed in the subject.”
Publishers Weekly

”Ambassador Campbell is an experienced U.S. diplomat and longtime friend of Nigeria. This book provides candid insights into the dynamics, challenges, and pitfalls of Nigeria’s struggle to become a cohesive twenty-first-century polity and how our bilateral relations can be strengthened. I strongly recommend it to all who wish to understand one of the most consequential countries in the world.”
John N. Paden, George Mason University

”Nigeria is a pivotal state in Africa by virtue of its population, economic possibilities, fledgling democracy, and regional position. Yet the country has perennially struggled with political instability, economic stagnation, corruption, and internal conflict. John Campbell is among the most astute observers of Nigeria and a thoughtful voice on U.S. relations with the continent. His prescriptions in this book draw upon realistic assessments of the Nigeria prospect and the potential of American policy.”
Peter Lewis, Johns Hopkins University

”Drawing on his long experience, deep knowledge, and remarkable career as a diplomat, together with the rich sources of information he has gathered from scholars, public intellectuals, and activists, John Campbell provides rich insights into the social, political, and economic life of Nigeria. His perceptive analysis of the difficult terrain and multiple challenges the country has faced over its sixty years of independence make his timely book an essential resource for understanding Nigeria’s place—past and present—in the world today.”
Jacob Olupona, Harvard University

”Former diplomat and Africa expert John Campbell provides a clear-eyed vision of Nigeria and why it matters. A former ambassador says the US needs to reimagine its engagement with a modern Nigeria

Nigeria: Disintegration Of Nigeria Is Imminent – Afenifere And Others Insist