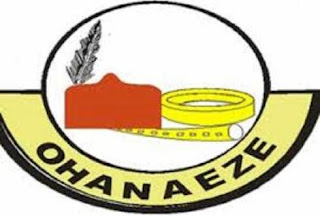 Comrade Igboayaka stated this in Enugu on Tuesday 24th November while addressing newsmen on the undemocratic intrusion of the election process by Southeast governors and cliques of elders who are hiding under the shade of Elders Council while their real motives is to truncate the democratic process of Ohanaeze Ndigbo for their political interest and selfish reasons.

Igboayaka stated that OYC’s earlier claim of a plot to rig the Ohanaeze Ndigbo election have manifested, as on November 23, 2020, the group of illegal political maradonas hiding under Imo Elders Council  presented whom the Imo State governor had already chosen and turning back ceremonially presenting him to  Imo State governor, the Southeast governors Northern stooge Prof. George Obiozor as their clique of consensus candidate to rig him in as the next president-general of Ohanaeze Ndigbo to replace the outgoing Nnia Nwodo.

At the National Executive Council meeting of Ohanaeze Youth Council, it was resolved that the constituting of the electoral committee which empowered each governor in the Southeast to recommend two persons is unacceptable to Ndigbo.

That the so-called electoral committee of governors’ recommendation and undemocratic decision of the illegal constituted Imo State Elders Council led by Engr. Emmanuel Iwuanyanwu is null and void, and every decision that did not meet the general interest of over 70 million Igbos is unacceptable.

OYC advised the Iwuanyanwu-led Imo Elders Council not to engage in further individualistic and ill-motivated political interest over the election that is tantamount to bridging peace in Ohanaeze Ndigbo and in Igboland at large.

The council resolved that any bridge of constitutional framework in the process of the election shall be massively rejected by over 30 million Igbo youths and Ndigbo in general.

The council regretted that Ohanaeze Ndigbo has lost its pride, dignity, focus and respect of over 95% Igbos therefore, opted that they are determined to bring sanity, trust and confident of Ndigbo back to the Ohanaeze Ndigbo, maintaining that Ohanaeze Ndigbo election has passed the level were few microscopic political profiteers and elements stays in their parlor and draft list of incompetent characters in the name of Ohanaeze Ndigbo National Executive Council(NEC).

The Council urged Nnia Nwodo to bury all plans of electoral fraud, and employ every democratic process for smooth process of his transition.

The Council warned that any unconstitutional meeting by non-existing group with the motive to sabotage the general interest of Ndigbo will not be tolerated by Igbo youths, stating that the youths must use every pro-active measure and resistance to respond to the so-called Elders and governors that have mortgaged the future of Igbo youths since 1999.

OYC president further stated that in 2021 Ohanaeze Ndigbo will determine the political future of Igbo youths and Ndigbo at large, stressing that whosoever that want to trade or gamble, upturn the people’s mandate will surely hit a brick wall.

Just In: Jubilation As UN Includes Biafra In The List Of Africa Nations Officially