December 31 , 2020 | EASTERN PILOT Report By : Eniola Akinkuotu , Abuja The congestion at the Apapa port in Lagos has become so bad that t… 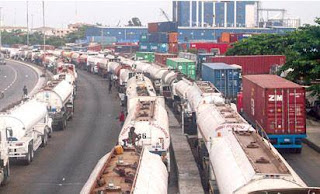 The congestion at the Apapa port in Lagos has become so bad that trucking a container from the port to the mainland which is just about 20km, now costs about $4,000 (N1.5m) which is almost the same cost as shipping one container from China to Nigeria. This is according to a report by the Financial Times of London titled,‘Nigeria’s port crisis: the $4,000 charge to carry goods across Lagos.’ The dysfunction in Lagos is allowing other West African ports, servicing far smaller markets, to eclipse Nigeria.

“Lome, in Togo, is now the region’s busiest port, and cargo destined for Nigeria is increasingly offloaded or shipped via smaller vessels from ports in Ghana, Ivory Coast, Cameroon and Congo-Brazzaville,” says the Financial Times. The business newspaper stated that congestion, bribery and storage costs add to problems for importers in Nigeria. Financial Times reports that Cargo ships often wait more than a month off the coast before they could offload their goods in the port

“The congestion at the port in Lagos has become so bad that it can cost more than $4,000 to truck a container 20km to the Nigerian mainland these days, almost as much as it costs to ship one 12,000 nautical miles from China,” it said. It added that In Lagos, the port area “is even more crowded at the busy year-end period, and the Seaport Terminal Operators Association estimates that the congestion costs the country $55m (N20.9bn) a day in lost economic activity.” Jumoke Oduwole, who was appointed by the Federal Government to improve the ease of doing business, admitted that the development was bad for the economy.

According to FT, the port’s capacity has not increased since 1997, even as Lagos’s population has roughly tripled. Nigeria imports a lot of raw materials and almost all finished goods, and the congestion is causing production delays for multinationals. “The average spot rate this year to ship a 20ft container from Shanghai to Lagos is about $3,000, according to Shanghai Containerized Freight Index data provided by Dutch shipping consultancy Dynamar, the equivalent of about $3,750 to $4,000 for a 40ft container.

“The current spot rate is $5,000. Cargo ships often wait more than a month off the coast before they can offload their goods in the port — roughly how long some spend in transit to Lagos from China. “Increased congestion at the end of the year has pushed prices for the transport of goods to the mainland higher. “Rather than pay lower rates for a truck that could take several weeks to enter the port, while accruing costly terminal container storage charges, most importers opt to pay spot prices to fleet operators, which charge N1.5m ($3,953) to drive a 40ft container from Tin Can to warehouses within Lagos, according to senior executives at logistics firms. Apapa is cheaper at the moment, with current rates up to N700,000, in part because it is thought to be a better run

“The port congestion is caused by ageing infrastructure, meagre rail transport that forces 90 per cent of cargo to go by road and an almost complete lack of automation, which means every container must be physically inspected by customs officials. It has been compounded by increased sea traffic since the closure of the country’s land borders to combat smuggling last year,” it stated.