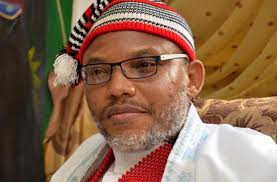 A contingent of the Nigerian military on Wednesday morning allegedly invaded the country home of Mazi Nnamdi Kanu, the leader of the Indigenous Peoples of Biafra (IPOB).

The house served as the official palace of his late father, HRH Eze Israel Kanu, who was the traditional ruler of Isiama Afaraukwu, Ibeku in Umuahia North LGA of Abia State before in his death last year. The traditional ruler and his Queen who also died last year following the invasion of their palace by soldiers in an attempt to capture Nnamdi Kanu, was buried the same the day, February 14, 2020 in the palace.

PNo reason was given for the invasion, but Nnamdi’s younger brother, Emmanuel Kanu told us in a telephone chat that the soldiers were about 30 in number.

It was gathered that the soldiers left immediately they entered the palace and did not utter a word to anybody. The frightened residents, including members of the Jewish Community were not able to ascertain why the soldiers paid the surprised visit to the palace at that time.

Emmanuel however informed that the soldiers came in three army vans and later drove round the Isiama Afaraukwu Community, prompting people who sighted them to scamper away to safety. “They’re there, go and confirm he told us,”, assuredly.

However, when we visited the compound to ascertain what transpired, a man suspected to be a devotee of the Jewish faith explained that the “unwanted visitors came here this morning uninvited”, adding that they left immediately they entered.

“Thereafter, they patrolled round the community, putting fears to the lives of the now peaceful community”, the man added.

Asked if they arrested or injured anybody, the man said they neither arrested any member of Mazi Nnamdi Kanu’s family, nor injure or arrested any of the devotees of the Jewish Religion. “They just walked away few minutes after they entered. Go and ask around, you’ll confirm what I’m telling you”, he said.

A woman who stated that she witnessed the incident, confirmed that the terrified residents took to their heels as they sighted the soldiers and that they (the villagers) thought it was another invasion of Nnamdi’s resident. “This is becoming invasion too many”, she added.

He won the Shell Award on Investigative Journalism and Environmental Cleanliness.

(VIDEO) Slay Queen Disgraced, Arrested For Stealing Iphone 7 Plus From A Shop

Budget 2021: Brace up for another recession — Buhari