Year 2020 Ended In Nigeria With 2,400 Christians Hacked To Death By Jihadists

Nigeria recorded escalated and deteriorated number of Christian deaths in the last two weeks of Dec 2020 with additional death of 200 Christians; bringing the total number of Christians hacked to death by the country’s Jihadists and Muslim held security forces in 2020 to 2,400. This number further represents the same number of Christians hacked to death by Jihadist Fulani Herdsmen in 2018 alone.  The spike in the killings in Dec 2020 is strongly believed to have been influenced by the US Electoral College confirmation of Mr. Joe Biden as winner of the Nov 2020 Presidential Poll. It could also be validly interpreted as a way the Jihadists wished to “celebrate” the emergence of Joe Biden as US President-elect and loss of same by outgoing President Donald Trump. To Nigeria’s Jihadists and their patrons in the country’s Presidency, “it is likely a season for continuation and consolidation of anti Christian butcheries, earning them immunity and impunity boarding pass under the Presidency of Joe Biden”. 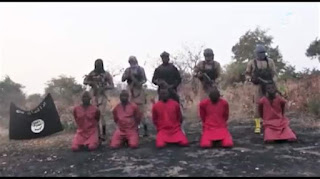 In the latest anti Christian butcheries, both Boko Haram/ISWAP and Jihadist Fulani Herdsmen have renewed and increased their attacks on Christians, their worship centers and other properties. In the last two weeks of Dec 2020 including the Christmas Eve and after Christmas, there have been unchallenged attacks on Christians and their churches and other properties including dwelling houses and farmlands. The areas that are worst hit by renewed Boko Haram and ISWAP attacks are Christian areas of Borno (i.e. Gombi and Chibok) and Adamawa (i.e. Garkida) and Damaturu-Maiduguri Highway where not less than 40 Christians have been abducted and ten killed since 18th Dec 2020. The Fulani Herdsmen’s jihadist attacks on Christians and their properties have also increased dangerously since Dec 2020 and Christmas season and have been concentrated in Southern Kaduna where not less than 40 Christians have been hacked to death since 17th Dec 2020 as well as Benue State. There has also been an increase in attacks targeted at Christian communities in Munya, Rafi, Shiroro, Bosso and Mashegu Local Government Areas of Niger State where not less than 20 persons have been killed and over 40 abducted since 14th Dec 2020.

About 200 Christians have been killed in Nigeria since 15th Dec 2020. The slain Christians included those abducted on religious grounds and likely to have been killed in captivity including five abducted from Garkida (Adamawa) by ISWAP Jihadists on Christmas Eve and beheaded on 29th Dec 2020. Out of the about 200 Christian deaths, Boko Haram/ISWAP accounted for about 130 while Jihadist Fulani Herdsmen/Fulani Bandits took responsibility for remaining 70 Christian deaths. In all these, the Nigerian security forces have not only continued to wobble and look the other side, but also become ‘alarmists’ by only “alerting Nigerians particularly Christians of imminent attacks after which they (security forces) slumber and do nothing.

Statistics: According to a local source and church leader, the unreported number of Christians killed since the beginning of Dec 2020 by Boko Haram/ISWAP including abducted Christian travelers and rural others especially in Yobe, Adamawa and Borno States is nothing less than 60.  Boko Haram/ISWAP had prior to Dec 2020 Christmas season announced their plans to launch series of violent attacks against Christians in the Northeast as ‘a punishment for marking “un-Godly” feast of Christmas’. The Nigerian security forces including the country’s Spy Police only replicated the warnings and did nothing to protect the Christian population when under attacks or prior to same. Among 130 Christians hacked to death by Boko Haram/ISWAP since then are 35 Christians abducted on 18th Dec 2020 along Damaturu-Maiduguri Highway and five others killed on the spot. As reported by several media, Boko Haram/ISWAP had blocked dozens of private and commercial vehicles plying the Highway and forcefully separated Christians from Muslims and abducted over 35 of the former abducted and killed five others who tried to flee on the spot. The Nigerian Weekly Security Trackers of the US Council on Foreign Relations also reported the killing of 11 Christians by Boko Haram and abduction of seven others on Christmas Eve in Chibok, Gombi LGA in Borno State.  Abducted Christians in Nigeria, abducted on the basis of their faith hardly return alive as they are routinely killed in captivity or turned into sex slaves and converted to Islam if they are young females..

The authorities of the Church of Brethren in Nigeria had in their statement of Dec 28, 2020, reported the killing by Boko Haram of 12 members of the Church on Christmas Eve of Dec 2020 in Garkida, Gombi Local Government Area and Pemi Village, all in Adamawa State. Boko Haram/ISWAP had in the attacks burnt and razed six Churches belonging to the Church and a Living Faith Church. The Church of Brethren in Nigeria had also lost as at June 2020 a total of 8,370 members to Boko Haram/ISWAP and in the attacks of 24th and 26th Dec 2020, not less than eighteen members of the Church including a pastor were abducted. At least three more communities along the Biu Road were attacked the day after Christmas, Dec. 26 and three more churches and many houses located at Tashan Alade, Kirbitu, and Debiro towns, all in Adamawa State were destroyed. On 31st Dec 2020, the Morning Star News based in Jos, Plateau State, gave the names of five Christian abductees (Uka Joseph, Sunday, Wilson, Joshua Maidugu and Garba Yusuf) beheaded by ISWAP on 29th Dec 2020. They were among those abducted in Garkida in Adamawa State in the Christmas Eve attacks.

Further, not less than 70 Christians have been hacked to death by the Jihadist Fulani Herdsmen/Fulani Bandits since 15th Dec 2020, out of which Southern Kaduna lost about 40 and others including Benue and Niger State 30. There have also been reported killings since Dec 2020 by the Jihadists in Ogun, Oyo, Osun and Ondo States leading to scores of deaths and destruction of houses and farmlands. Among those Christians hacked to death in Southern Kaduna, according to Jos-Nigeria based Morning Star News of 27th Dec 2020, are seven Christians killed on 17th Dec 2020 in Gora Gan Community during which a family of eight (Ayuba Sheyin, 69; his wife Jummai, 55; son Savior, 14; second son Goodluck, 11; daughter Patience, 5; and Peter Akau, 70; Joel Ishaya, 35; and Binta Musa Tauna, 85 were wiped out.

“The Sheyin family lived just in front of the primary school where the military, meant to secure the village after previous attacks, are stationed,” Bodam said. Other Jihadist Herdsmen killings took place on 17th Dec in Zango-Kataf County where 10 Christians were killed, 21st Dec in Ungwan Jatau and Ungwan Gimba where three were killed, Zangon-Kataf County on Dec. 19, where four Christians were killed in four other villages: Ungwan Gaiya, Ungwan Gimba, Ungwan Makama and Apimbu as well as in Chikun County, on Tuesday (Dec. 22) where seven Christians were killed and four wounded in Gbaja village and Ungwan Gwaiva where two more Christians were killed. According to Premium Times report of 27th Dec 2020, armed men in separate incidents, attacked two different communities in Benue State killing at least five persons. Two of the victims were killed early Sunday in Gwer West Local Government Area while the other three, members of the same family, were killed in Katsina-ala Local Government Area, late on Saturday (26th Dec). The Benue police spokesperson, Catherine Anene, said the family members killed included a father, his wife and son in Nagu village of Katsina-Ala. On the late night of 15th Dec 2020, at about 11pm, the Jihadist Fulani Herdsmen attacked and killed Barr Moses Udam, his wife and their unborn child. They also jumped into the next compound and butchered one Mr. Nyiko, a blind man of age and three of his grand children. Their killing took place at Agboughol, Kpeifi behind NSK Church along Kua Road in Makurdi, Benue State. These instances are just to mention but a few.

Biafra: God Told Me That Nigeria Will Break Up Before The End Of 2020 – Prophet Elijah Ayodele